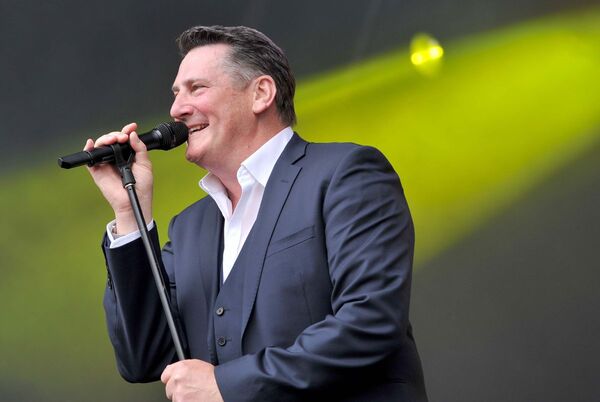 After a three-year gap, Chilfest was finally back with a retro party to celebrate its 10th anniversary.
The much-loved family-run festival in Tring (England) had been put on hold by the pandemic since 2019 so it was a highly anticipated return for its loyal festival-goers.

And its line-up certainly didn’t disappoint as it spanned three decades (70s, 80s, and 90s), giving a nostalgic blast from the past for all tastes and ages.

Getting the audience in the party mood was 80s DJ Pat Sharp who announced: “Can you make some noise for Chilfest coz we’re back! We’ve been waiting since 2019!”

Kicking off the festival was the suave, sharp-suited Tony Hadley and his TH Band who performed a set of true gold classics, much to the delight of his many fans who had arrived at the festival early to catch his midday slot.

His new material including Because Of You was a huge hit with the crowd alongside his established back catalog of hits such as Gold, Through The Barricades (Tone’s favorite), True and Chant No 1. His homage to Queen, Radio Ga Ga, brought a taste of Live Aid magic to leafy Tring with the audience over-head clapping in unison.

The Chilfest time machine then fast-forwarded by a decade and brought the audience Dancing in the Moonlight (although it was only 1 pm!) to 90s legends Toploader, who proved their prowess and energy was just as powerful as it was back in the day.

Larger than life frontman Buster Bloodvessel, with his flamboyant leopard print coat and tartan bovver boots, bounded onto the stage with Bad Manners for a ska-fest. From My Girl Lollipop to Lip Up Fatty and the Can Can, the band got the crowd reliving their misspent youths with some skanking grooves. A ska-infused cover of Frankie Valli’s Can’t Take My Eyes Off You was a stomping success with the crowd.

The Real Thing quickly brought the tempo back to 70s disco-land with great renditions of You To Me Are Everything and Can You Feel the Force among others. The disco ball continued to spin with Heatwave whose younger band members would have made the originals proud with their powerful performances of Always and Forever and Boogie Nights, and a couple of Michael Jackson hits thown in, in memory of former bandmember Rod Temperton who wrote the tunes.

The ever-youthful, charismatic Toyah dazzled the crowd with her gold dress and her equally striking 80s hits It’s A Mystery and I Wanna Be Free. She also gave her unmistakable Toyah stamp to a couple of memorable covers – Martha and the Muffins’ Echo Beach, and also her new single, an impressive cover of Grace Jones’ Slave to the Rhythm, a song which Toyah had done the original demo for in the 80s.

Ironically the sunny weather at Chilfest took a turn for the worse during Heatwave’s performance, but it was during Peter Hook and the Light’s set that the heavens truly opened, which Peter later described as a “Manchester shower”.

The torrential rain didn’t dampen the crowd’s enthusiasm, in fact it enhanced the edgy Hacienda vibe and an unexpected rainbow added even more magic to a set that proved to be one of the highlights of the day. Despite being drenched, the crowd danced in the rain to a deluge of New Order and Joy Division hits including True Faith, What Do You Want From Me and Love Will Tear Us Apart.

Maxi Priest heralded a good dose of reggae for the masses and got the crowd singing along to his popular covers Wild World and Some Guys Have All the Luck, as well as his USA Billboard No 1 Close to You.

Cutting a dashing figure in his bright blue patterned suit, ABC’s frontman Martin Fry proved a hit with the Chilfest crowd with a stylish performance of Lexicon of Love classics including The Look of Love, When Smokey Sings, Poison Arrow and All of My Heart. The appearance of a rainbow during Martin’s rendition of All of My Heart mirrored its lyrics – “There’s a crock of gold, at the end of the rainbow”, a coincidence not missed by Martin who pointed out the rainbow to the crowd – a real special moment.

Bringing the festivities to a close were headliners The Proclaimers whose raw Scottish grit was required for the audience who had braved The Highlands weather conditions to see the guys in action.

Hits including I’m Gonna Be (500 miles), Letter from America, Sunshine on Leith and I’m On My Way had the crowd linking arms and enjoying a last Scottish fling before Chilfest closed its doors for another year.

Not to be forgotten was a hilarious guest appearance by comedian Johnny Vegas who had the audience in stitches as he introduced the headliners. Another unexpected highlight was the sensational child singer Immi Davis, a semi-finalist of Britain’s Got Talent, who made a special appearance in between acts and blew away the crowd with an amazing vocal performance.

Well done to Chilfest director Steve Butcher and the Chilfest family for putting on a right royal shindig for the 10th anniversary – it was well worth the wait.